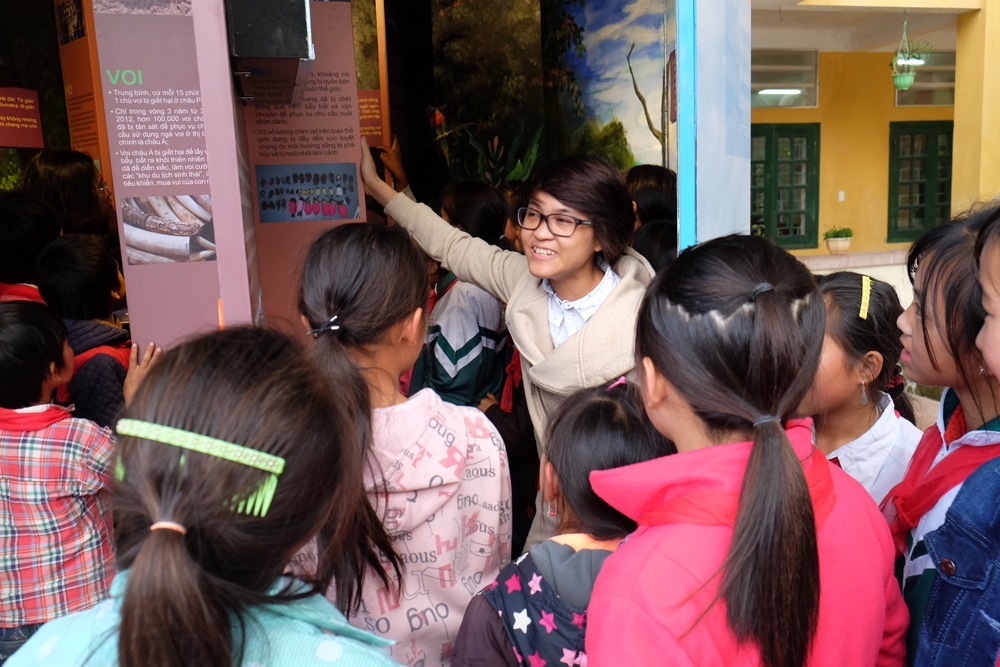 Liked by Adam Barlow and 2 others
5

Hello, I'm Chang and I'm a Vietnamese wildlife conservation scientist. I'm the Director at WildAct, a conservation charity and non-governmental organisation based in Vietnam.

I grew up in Vietnam. From a young age, I was confronted with the ugliness of illegal wildlife trade, seeing chained up monkeys that were offered for sale on the streets and bears that were held to extract bile for Traditional Asian Medicine. After witnessing a bear being treated for his bile, I promised myself that I would do everything in my power to protect not only the bears, but all wildlife in Vietnam. I finished her PhD in Biodiversity Management, researched into the impact of wild animal part use in Traditional Asian Medicine on the African wildlife, at the University of Kent, England.

I am the founder and executive director of WildAct, an NGO which focuses on monitoring the illegal wildlife trade markets and provides conservation education programmes for Vietnamese youth. Since 2018, WildAct organised the first ever master course on Combating Illegal Wildlife Trade, in collaboration with the University of Vinh for Vietnamese students and early career conservationists. WildAct is also involved in providing scholarships for exceptional students to conduct their own research. This national capacity building project adds crucial value to the regional and global efforts in combating illegal trade of wildlife products in the long term, especially when Vietnam is still considered as one of the largest illegal trade hubs, transit and consumer countries. All students who signed up to the course in 2019 had now being employed as a full-time staff in wildlife conservation sector in Vietnam.

Thank you for the vital work you do.

For those of us who only have surface-level knowledge about wildlife trade, can you explain what the biggest barriers are to tackling the illegal trade of wildlife products in Vietnam?

Trang Nguyen
over 1 year ago

Corruption. And this is not only with Vietnam but many other countries in the world.

K Curran
over 1 year ago

Hi Chang. Your master course sounds amazing. And what a tremendous outcome to have the students now employed in the field. What do you think enabled this success? For example, was it the instructors? The collaboration of students? The support from you and your organization? I am interested in learning more about what in your approach made it so successful, especially at a time when the wildlife trade is increasingly recognized globally.

Trang Nguyen
over 1 year ago

Hi there, thanks for your question. It is definitely the combination of what you mentioned. For example, we invite guest-speakers who are experts in the field to come and give talk, rather than having academic lecturers teaching theory. This not only providing a chance for students to learn about practical conservation and experience shared by experts, but also a chance for networking. One of our students actually were offered a job interview during the course as the guest-speaker was so impressed by her. Participants of the courses are also required to do 5 - 8 weeks professional placement (similar to an internship) at a recognised NGO in Vietnam in relevant field, so that they can learn about the job, as well as being recognised by potential employers. I'm happy to discuss more if you are interested!

Lucy Scott
over 1 year ago

Firstly, I want to say a massive thank you for all of the work you do.

I am a third year Conservation student at DICE, hoping to soon be an International Wildlife Trade MSc student. In terms of the international wildlife trade, where do you think the biggest changes need to be made? I have found myself beginning to focus more on the importer rather than the exporter, but is there any angle or aspect of the trade that needs to be studied as a priority? I hope this makes sense.