Here's a very interesting event with a very fascinating topic that you all might be interested in? What do you think about this kind of question?
(James) David Hill
Events Manager, Save the Rhino International
Follow
Like Liked by Adam Barlow and 3 others

Page not found | Save The Rhino

We’ll send you the latest news about rhinos plus information about our work, campaigns, and events. We promise never to sell your email address or share it without your permission, and you can unsubscribe at any time – please view our privacy policy here.

Join our live discussion with some of the world’s leading rhino conservationists to answer the question: “How many rhinos do we need to save?”

Across Africa and Asia, how many rhinos should we aim to save for all five species to thrive? We’ll be talking to Members of the IUCN’s SSC African and Asian Rhino Specialist Groups to discuss this Thorny Issue.

We’ll explore national rhino strategies and their target numbers for each species: how are these figures agreed, and how would achieving those targets affect rhino species’ categories on the IUCN Red List? What does success look like?

We’ll ask what rhino populations are needed to achieve these targets, where they would be, and operating under what management models: are all rhinos equal? Do rhinos in zoos or very small or single-species game farms count, or should they be removed from overall totals? Does the recently reported sharp decline in the number of Southern white rhinos in Kruger National Park mean that, for example, the John Hume’s population on Buffalo Dream Ranch is now more valuable to the world?

We’ll also discuss whether there are rhino populations, or even subspecies and species, that cannot be ‘saved’. What should be done with them? Should efforts and resources to save a doomed rhino population be stopped?

Cathy Dean has been CEO of Save the Rhino International since 2001. She is a Member of the African and Asian Rhino Specialist Groups, won the Harry Messel Award for Conservation Leadership in 2015, and has run seven ordinary and three ultra-marathons to raise funds for rhino conservation.

Dr Ben Okita is the Director of Conservation Policy and Planning at Save the Elephants, and co-Chairs the African Elephant Specialist Group. He headed both the rhino and the species conservation programmes at the Kenya Wildlife Service and was Vice Chair, and remains a Member, of the African Rhino Specialist Group. His BSc, MSc and PhD thesis focused on black rhino. He has 23 years of professional experience and was awarded Order of the Burning Spear in 2008 by the President of Kenya for his distinguished service to the nation.

Dr Bibhab Talukdar is Chair of the Asian Rhino Specialist Group and Member of the African Rhino Specialist Group, as well as Secretary General of the Assam-based NGO Aaranyak and the International Rhino Foundation’s Asian Rhino Programme Coordinator, overseeing the IRF’s work in Indonesia and India. He has been involved in rhino research and conservation in Asia since 1996.

Michael ’t Sas-Rolfes is a researcher and consultant with expertise in wildlife conservation economics. Based in Cape Town, South Africa, he is affiliated with the Oxford Martin Programme on Wildlife Trade at Oxford University and is a Member of the African Rhino Specialist Group.

Raoul du Toit (BSc Hons, MSc) is a Zimbabwean whose involvement with rhinos began with his appointment in 1985 to the former African Elephant and Rhino Specialist Group, as Scientific Officer, and is now a Member of the African Rhino Specialist Group. Thereafter, he worked for WWF on several rhino projects in Africa, including the establishment of large rhino conservancies in southern Zimbabwe, before establishing the Lowveld Rhino Trust, of which he is Director. Du Toit was awarded the Sir Peter Scott Award (by the IUCN Species Survival Commission) in 2009 and the Goldman Environmental Prize for Africa in 2011.

Register now to join us online and submit your questions to the panel of experts. 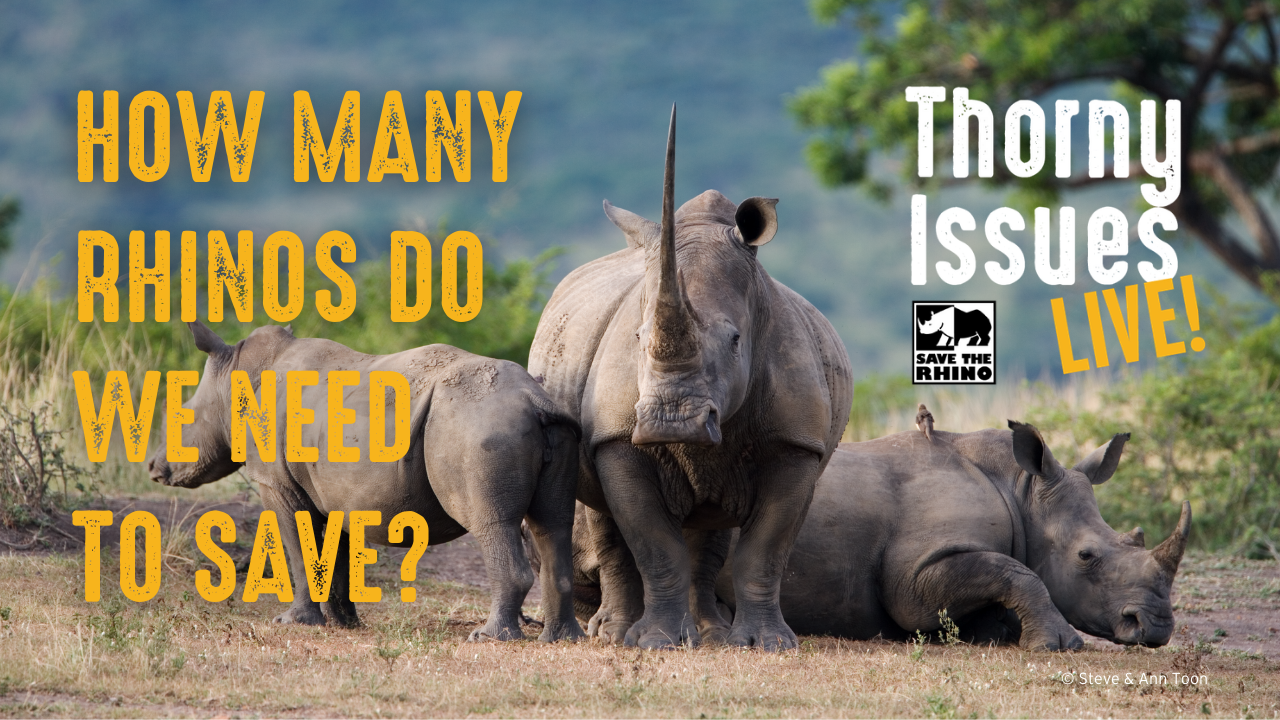 Here's a very interesting event with a very fascinating topic that you all might be interested in? What do you think about this kind of question?