Filmmaker Fiona Tande, joined WildHub in 2021 and after reading her introduction, I knew I had to learn more about her career path and her current projects. Fiona is truly inspiring and she graciously agreed to be interviewed despite her busy schedule. She shares with us her personal and professional journey in becoming a filmmaker along with some of the barriers she faced. She also gives us insight into producing Kenya's first wildlife film festival, Pridelands Wildlife Film Festival (PWFF).

Carolyn Rosevelt (CR): In just a few years you have conquered underwater, air and terrestrial filmmaking. How or when did you realize you wanted to transition from wildlife conservation to storytelling through filmmaking?

Fiona Tande (FT): It’s funny, I don’t feel like I’ve conquered any of those fields. I’m still such a newbie in wildlife filmmaking. I’m just so hungry to build my skills in those different forms of filmmaking that I throw myself into whatever space will have me.

I first got into wildlife conservation because of the films and series I watched on NatGeo growing up. It was Derek and Beverly Joubert’s, The Last Lions, that catapulted me from simply wanting to make a difference to getting off the couch and looking into ways I could serve in the conservation space. I’ve often thought back on why I didn’t go straight into filming, but it didn’t occur to me that the was a space for someone like me. I’d never seen any black wildlife filmmakers. And while I found the same was the case in wildlife conservation, it somehow felt more feasible than filmmaking because while I may not have had a research background, I found that I could mostly make up for it with my sheer will, passion and interest in wildlife conservation.

Film has been a different beast altogether, and while I’ve been able to improvise by taking short film courses and masterclasses, primarily one needs training and I’m seeking those next steps. An opportunity to take part in a month-long course in South Africa dedicated to wildlife filmmaking presented itself back in 2018. I’d toyed with the idea before when a colleague from a conservation project mentioned she might like to get into that field and at that moment, a lightbulb went on in my head. But I didn’t have the money to enroll in the film school universities, of which the best ones could only be found outside the continent. So, when I came across the program in South Africa, it was just a perfect fit. It has been a full circle journey from being inspired by natural history films and series as a kid to now creating wildlife conservation stories through film.

Lessons Learned: Follow your dreams, passions, and heart no matter how unconventional the path may seem to people on the outside looking in.

Image 1. Meeting Derek and Beverly Joubert for the first time back in 2016, the filmmakers who catalyzed my journey into wildlife conservation and the film industry. Photo credit: Noreen Muturo

CR: You have won several festival awards and I imagine being recognized for your craft helps propel you forward. Who or what has been your biggest support as an early-career filmmaker?

FT: The awards have certainly been a boost of morale, and it’s such an honor when your work is recognized. There’s still so much I want to do and many more eyeballs I’d like to get on stories about wild Africa from local perspectives. I pray that Emmys, Sundance, BAFTAS and Oscars are in my future. Not so much for the prestige but to get the spotlight on our content and its film makers.

My biggest support as an early career filmmaker was my dad. He never lived to see me take this unchartered road, but he was the one I went to talk to about my crazy dream to film wildlife. He scrapped all the savings he could manage as well as sold off some land to support my aspirations. He would sadly die of cardiac arrest later that year (2018) before my education plans were put in place, but he had already secured funding to set me on my journey. I know he still cheers me on from heaven and that’s why he's hands down my greatest support from day one!

Lessons learned: Shoot for the stars, your dreams are valid, and no one has the right to discount you!

CR: What prompted you to create Kenya’s first wildlife film festival, Pridelands Wildlife Film Festival (PWFF), and what will be your takeaway lessons when it is all done?

FT: I organized a media lab for wildlife filmmakers in 2020 and that inspired a couple of projects along similar lines in the country. Being part of the organizers on said projects, I quickly realized that the initiatives weren’t serving the filmmakers’ needs but instead just checking the “capacity building” box for the organizations.  They wouldn’t really address the challenges as faced by local content creators as experienced. I realized that the only way we would get tangible change is if we were at the helm of the change we want to see in wildlife and conservation filmmaking. The first step was creating a space where filmmakers could convene, interact, network and foster collaborations that would lead to putting out work by African storytellers and celebrating these on the African continent.

Lessons learned: Never ask for a seat when you can build your own table.

CR: What is your process for pitching an idea or project? Who do you talk to?

FT: Most of the work I’ve been involved in has been in readily structured settings i.e., film school, trainings, or media labs, so the ideas for projects were a collaborative process. However, I’ve recently been applying for grants and that’s been one way I’ve been pitching an idea. I also reach out to films’ producers who I’ve had the good fortune of being introduced to by mutual contacts in the business.

Lessons learned: Persistence and tenacity and networking pay off.

Image 3. On location for a shoot for the wildlife film course I was taking while in South Africa. Photo credit: Annie Post

CR: What are you most looking forward to during the PWFF festival and how can WildHub members help?

FT: I look forward to launching PWFF and tailoring it to African storytellers/creatives. Film festivals in my observation tend to be westernized, which is fine considering their location, but to have a gathering with the local people at the core of its design will really make this festival feel like home. I would love if WildHub members would consider supporting PWFF by following us on social media (@PWFFest on IG), connecting us to potential investors as well as consider attending and interacting with local filmmakers and exploring areas of collaboration. The only way we can hope to move the needle of change is if everyone is part of the process.

To find out how you can get involved or to attend PWFF please email  festival@pwff.africa

Fiona Tande
about 1 year ago

Thank you so much for offering to tell my story, Carolyn. I really appreciate the opportunity to share my journey and the lessons learned along the way with the WildHub community :)

Carolyn Rosevelt, MSc
about 1 year ago

You are very welcome and I can't wait to see what's next for you. If I can help elevate another story or person let me know.

Hey Fiona and Carolyn, such an inspiring piece! Very moving to read about your dad's support, Fiona.

We've also meanwhile had a few more people interested in wildlife filmmaking join our community, so hopefully some useful connections will be made.

Thank you for sharing your journey into film-making, Fiona, and thank you, Carolyn, for telling her story.

So inspiring and such a supportive dad, kudos to both :)

This is such an incredible story Fiona and thank you Carolyn for posting this. Your achievements are both amazing and inspiring and shows what is achievable despite your background.

A journalist’s tale of nature as inspiration

Communicating your message is crucial and it takes lots of practice

A bridge builder, a gift, and a conservation shift

Marine Conservation Network: How one woman is supporting a web of conservation groups by building relationships and deepening connections 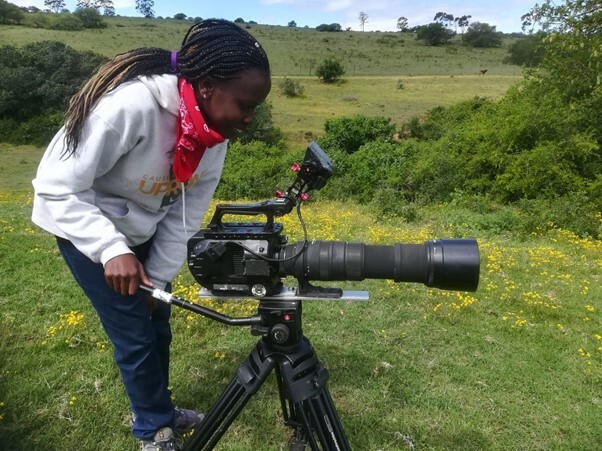 Lessons learned in creating a pathway for African conservation filmmakers to find a place in the industry.