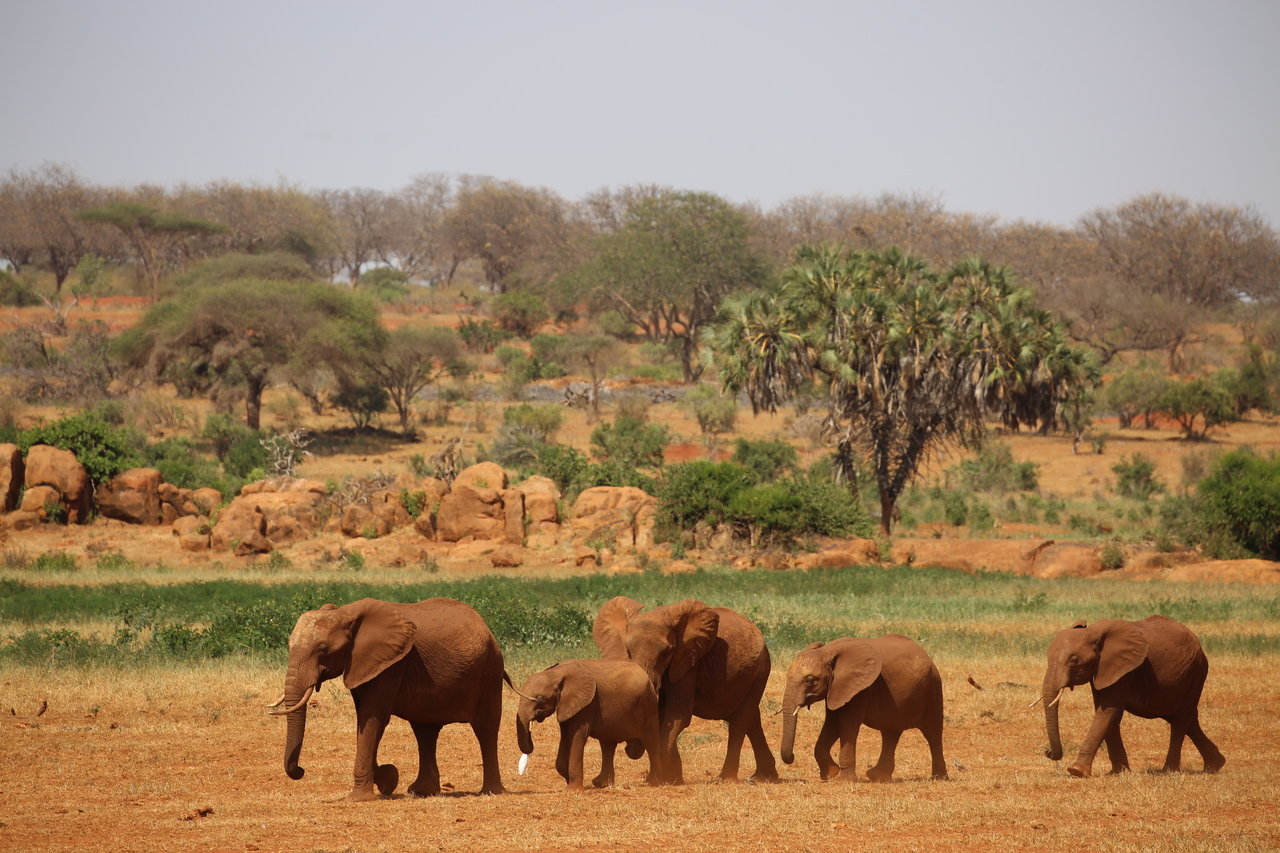 Liked by Adam Barlow and 6 others
8

I live and work in Sagalla, Voi subcounty, in Kenya. Sagalla lies in close proximity to Tsavo East National Park and numerous other protected areas that form a wildlife corridor connecting Tsavo East to Tsavo West National Park. Elephants frequently come to the community areas in search of water and food and routinely invade farms to eat crops and sometimes even houses to eat stored harvest (King et al. 2017). 80% of adults living in Lower Sagalla earn below a dollar a day and practice subsistence farming for the vast majority of their household income and food. Crop damage from elephants therefore poses a huge threat to their food security and livelihoods, negatively affecting their mental and physical wellbeing.

My role as a conservation scientist is to investigate human behaviour that contributes to conflicts with elephants and develop ways to encourage positive behavioural change that will promote coexistence. As I started working with the Sagalla community, I immediately realised that securing participation in project activities would be very challenging. First, many community members believed the project’s priority was helping elephants and that people’s needs were secondary. While visiting some homesteads during elephant cropraiding season, I was often asked, “are you here for me or are you here for elephants?”. The community also has a reputation for poor uptake of projects. Several colleagues from different organisations who had tried to implement agricultural projects cautioned me that my proposed activities would likely fail as the community can be quite resistant to changing their traditions.

In the 18 months since I started working in the community, I have implemented two projects that I can honestly say have seen early successes and have attracted participation of over 130 farmers and 40 community women. This is far more than I had expected and I believe the people-focused approach we took helped encourage this substantial community participation. Below are some of the things I believe we are doing right.

It is hard to talk to a farmer about protecting elephants when he has just lost his entire seasons harvest to elephants in a single night. It is even harder to talk to a mother about protecting elephant corridors when she is struggling to put food on her family’s table. We realised that we cannot expect the community to be engaged in our conservation activities when they are not able to meet their basic needs. It is a very simple logic that oftentimes as conservationist we forget; unless our urgent needs are met, we cannot have mental and emotional space to think of much else.

Conflict between humans and wildlife often escalates when local people feel that wildlife needs are given priority over their own (Madden and McQuinn 2014). We hosted meetings with local farmers and a women’s group for discussions about what they felt were their main challenges and supported them to prioritise these challenges and propose possible solutions. This participatory project design phase allowed us to develop livelihood projects that community members felt ownership over and that would help meet their immediate needs. Most importantly, it clearly demonstrated to the community that we cared about their wellbeing and this helped us build trust.

The main reason for such frequent elephant crop raiding in the villages is maize cultivation. Elephants love to eat maize and easily risk entering a farm to enjoy this delicacy. Maize is the staple food for the Sagalla community and therefore is planted every season whether there is a drought, outbreak of pests, or high chance of elephants eating it all before harvest. This particular behaviour has puzzled me profoundly. Why would anyone continue planting the same crop every season even if it is almost guaranteed to fail? Changing that cultural behaviour towards an alternative, elephant-friendly agriculture continues to be the biggest challenge that we face.

At time of writing, we have succeeding in getting 130 farmers to grow oilseed sunflower, a new crop, in 167 acres of Sagalla farmland. I believe this early success of swift and sizeable involvement from farmers on this new idea comes from the understanding of why the community continues to persist with maize cultivation. Humans endeavour towards consistency in the beliefs they hold (Manfredo and Dayer 2010) and the Sagalla community have a traditional belief that growing maize will establish food security and ensure a safety net for emergencies. This has been a tradition for many generations and despite changes in the climate and increased elephant movement in the community, this belief still persists.

By understanding what drives their behaviour, we were able to design our project approach to address the underlying values of the community. The sunflower project will substantially increase household income and subsequently address the long-term problems of food and financial insecurities.

Listen to the community, have patience and start over if you must

After several community meetings during the early stages of project design, I found that we had to significantly change the intervention approach we had conceptualised. Through a participatory community rural appraisal, we identified that the major challenges are droughts resulting from poor rainfall patterns and food insecurity brought on by elephants crop-raiding. We came up with possible solutions to mitigate these challenges, one being growing drought-resistant crops not palatable to elephants. Excited that our project was taking shape, we held another meeting to get the community seal of approval before starting. During this meeting, a village elder stood up and told us pointedly that our project will most likely fail. It should have been obvious to us, but we had completely overlooked what the community really needed first was access to water. If we provided access to water then the project will most likely take up. This realisation drove home the importance of listening to the community and finding different methods to help them articulate their needs more clearly.

We still continue to monitor our project implementation and receiving feedback from the community. It is our hope that the community will take full ownership of the project and increase their participation in conservation efforts.

Manfredo, M.J. and Dayer, A.A. (2004). Concepts for Exploring the Social Aspects of Human–Wildlife Conflict in a Global Context. Human Dimensions of Wildlife 9:1–20.

Lauren Hemmings
over 1 year ago

Hi Maureen, this is a really interesting article and I think the work you are doing sounds excellent. I first heard of the research into elephant reactions to bees when reading about Lucy King's work with save the elephants, after reading Ian Douglas-Hamilton's books about his battle for the elephants. Harmony between elephants and humans is  something that I have realised takes a lot of patience, but definitely can be achieved using smart solutions. I hope to one day work on a project such as this. Lauren

Hi Lauren, thank you very much for your comment and your interest in this article. It is indeed a battle trying to conserve elephants that live in a shared landscape with humans. As conservation scientist in this field, I feel we must include the participation and understanding of communities living with elephants, otherwise, most of what we do will not have much impact. Elephants and Bees project has an internship program that you could apply to once travel is open.

Danita Strickland
over 1 year ago

this is amazing Maureen, Malo lava. Listening, something everyone can learn to do Better. Love you from Samoa

Thank you, Dani. Working in the field is a really good learning experience. Hugs back!

Beth Robinson
over 1 year ago

Hello Maureen, thanks so much for sharing your this. I really enjoyed reading it and learning more about the complexities of this situation.

Thank you, Beth, I am glad you enjoyed reading this article. It is a complex situation and I am still learning. Understanding human behaviour is very challenging, I hope to learn more from the networks of conservationist we have in Wildhub.

Hello Maureen, this is really interesting, i like it. Am from Botswana, the country that has big population of elephants and high human elephant conflict. i like it where you emphasis community needs first approach and species needs second. oftentimes, we make mistake by putting animals' needs in front and forget the needs of the people we want to co-exist with wildlife. i wish to learn from you how you address this issue of human elephant conflict in Kenya.

Hello Lesole, thank you for your comment. It is indeed a tricky balancing act trying to meet species needs and human needs because they always seem to be in conflict. I think the best way is to find a middle ground and agree on some trade-offs so that we can promote coexistence. Feel free to contact me anytime you want to share ideas.